In order to teach empathy, museums like the Jewish History Museum and the Holocaust History Museum commonly adopt storytelling in their interpretive framework by use of audio/visual techniques to convey the meanings contained within the spoken, written, physical and space, and even, increasingly, the virtual world.

Gugulethu Moyo will speak about how those same storytelling and empathy building techniques have become increasingly important to fundraising for the Jewish History Museum in an environment where museums and other cultural institutions are fighting to survive. 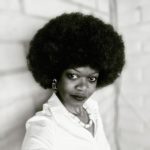 Gugulethu Moyo is the Director of the Jewish History Museum & Holocaust History Center in Tucson. A former attorney, Gugulethu is a human rights advocate with expertise in press freedom. She was the founding Executive Director of Media Defence, a London-based legal aid organization dedicated to defending media freedom worldwide.

Gugulethu grew up in Zimbabwe, from which she emigrated to the United Kingdom in 2004 after serving as In-House Counsel to Associated Newspapers of Zimbabwe, then publisher of Zimbabwe’s sole independent daily newspaper.

Gugulethu has served on multiple boards of directors; she currently serves on the board of the Council of American Jewish Museums and Child & Family Resources.

Her writing has been published in The Guardian, The Independent, New Statesman magazine and other publications. Gugulethu’s January 2021 appointment to the Jewish History Museum is featured as the cover story of the current (March-April) issue of Arizona Jewish Life magazine.

Gugulethu earned a Bachelor of Laws degree from the University of Zimbabwe and a Bachelor of Civil Law from the University of Oxford in the United Kingdom. She spent a year studying design at Harvard University’s Graduate School of Design in 2017. English is the third of multiple languages that Gugulethu speaks. She also performs at Tucson community fundraisers as the Afrobeats DJ Lady Gugu

April’s Breakfast is generously sponsored by Raise the Bar Consulting.