Pima County Recorder Gabriella Cázares-Kelly will be speaking to the Association of Fundraising Professionals chapter about her campaign fundraising as a working-class candidate. Gabriella is a dues-paying union member and non-traditional candidate of color, and one of her biggest challenges to running for public office was navigating the financial barriers. She will discuss the struggles of asking for money during a pandemic, the reality of taking a salary from her campaign, and her successes of small dollar fundraising. 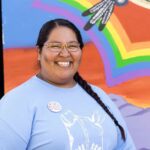 Gabriella Cázares-Kelly (she/her) is the current Pima County Recorder. She leads an office that oversees voter registration, early voting, and document recording for the county. She is a proud, union dues paying, former #RedForEd public school educator and community organizer. She is one of four women who cofounded Indivisible Tohono, a grassroots, community organization that provides opportunities for education and civic engagement for members of her tribe, the Tohono O’odham Nation. She was inspired to run for office after encountering many systemic barriers that were preventing people from simply getting registered to vote. She lives with her husband, Ryan, and their two children, who are now voting age. She is the first Native American to hold an elected Pima County office and the 3rd Native American to hold a county level office in the State of Arizona.